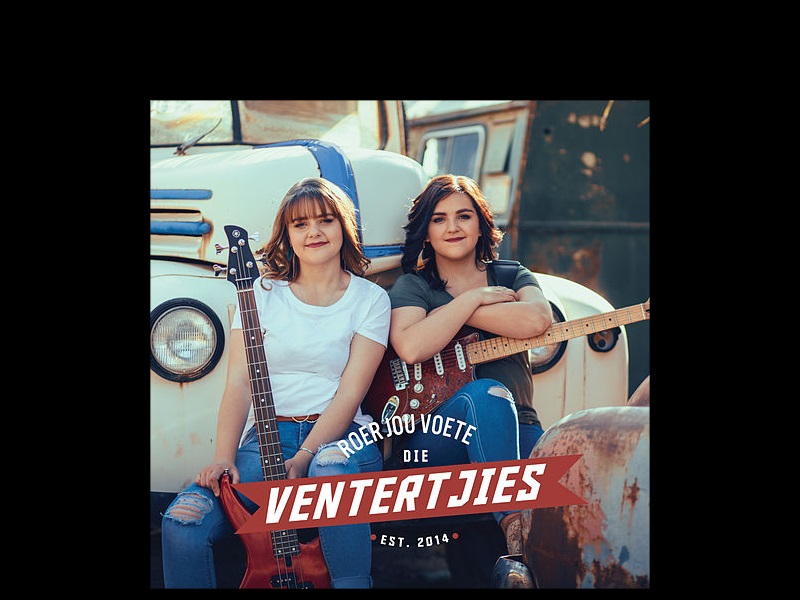 If there’s one group that knows how to get a party going, it is definitely the award-winning guitar duo, Die Ventertjies. Over the past six years, the upbeat and rhythmic adaptations of their own original tracks, as well as pre-existing favourites, have been a hit at every langarm dance party in the country.

The duo was also honoured with an Aitsa Music Award for Best Boeremusiek or Traditional Album in October 2019 and recently landed a record deal with the music giant, Universal Music, who immediately recognised their unique potential.

Now the girls are back in the spotlight, with a brand new album and single, which promises to surpass the success of all of their predecessors! The JIVE BUNNY BOERE-KEURSPEL is the first release off their long-awaited new album, ROER JOU VOETE.

The track differs a bit from the normal Boeremusiek style that they are known for. “This medley is Rock ’n Roll with a unique ‘boere’ twist and combines snippets from everyone’s favourite dance hits from the 1950’s,” the two reveal about their latest single. “We love to see people enjoying our music and would always like to keep the dance floor full. With this song, listeners are not going to be able to sit still, because the tune is contagious and will inspire everyone to dance.”

To capture the upbeat feel of the single, a beautiful music video was filmed at a 60’s diner in Pretoria. Everyone on the video was dressed according to the theme and Christian Wolf, of Brickwolf Creatives, was in charge of the camera. “Fatman is the waiter who serves milkshakes and at one point two of the guests at the restaurant even get up to jive along. We hope that viewers will enjoy this video and song just as much as we do.”

Furthermore, the sisters are also very excited to share their new album with the country. It is a combination of the best langarm dance songs on one CD. Quite a few of the fourteen tracks on the track list are new originals, while there are also some delightful adaptations of crowd favourites like Lekker Ou Jan and Teenage Queenie. ROER JOU VOETE remains true to the style they are known for, but also showcase how much they have grown as musicians.

Nicola (20) and Lindie-Lee (17) Venter grew up in a musical home and follow in the footsteps of their father, Hennie, who has been playing in bands for years. Although they did not have formal musical training, Nicola can play nine instruments, including the guitar, bass guitar, drums, piano, keyboard, banjo, mandolin, harmonica and accordion, and Lindie four, namely guitar, bass guitar, keyboard and banjo. Before becoming a duo, both of them played in one of their father’s bands.

They were both still in school when their debut album, Vlinder Vingers, was released in 2016, which produced their most popular single, Lentevrolikheid of which the video has already had more than 220 000 hits on YouTube. Their second album, Wikkel Vingers, secured them a SATMA award (Best Boeremusiek-album) and two Ghoema nominations. The band’s third album, Vanaand Dans Ons Weer, was released in 2019 and is already a favourite on every party playlist. The group has also performed at several major festivals, functions, venues and events across the country and in Namibia, such as Innibos, the Ghoema Award Ceremony, Carnival City and more.

The duo describe themselves as unique and passionate and is inspired Ricardo Borman and Hansie Roodt’s work. They would also like to work with Klipwerf Orkes and Die Campbells someday. “We can’t single out a specific artist that we look up to, because everyone has something different to offer. We learn, wherever we can, from each and every musician we listen to,” the duo says.

About the challenge of working together as sisters, the ladies reveal: “We often disagree when it comes to song choices, because we don’t always like the same music, but fortunately we have learned to deal with it. The most fun part about performing together, is the fact that we are comfortable with each other and are always there for each other and that makes us calm.”

JIVE BUNNY BOERE-KEURSPEL is definitely one of Die Ventertjies’ most enjoyable dance numbers to date and is a perfect indication of what can be expected of the rest of their album. ROER JOU VOETE is the perfect addition to any music lover’s collection and will remain popular for years to come.