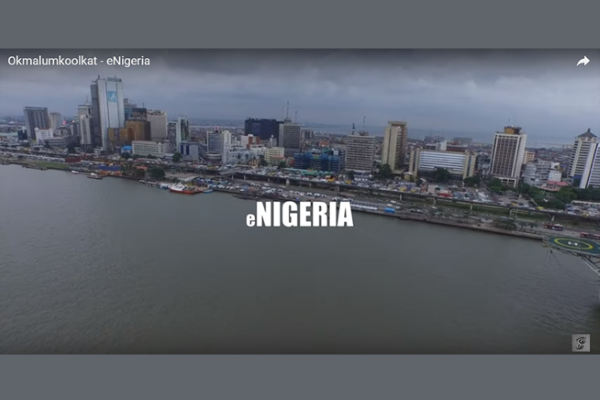 On 25July 2019 Smiso Zwane, aka Okmalumkoolkat, took to Instagram to release a snippet of his upcoming documentary called eNigeria.

The four-minute doccie sees the Gqom-star from Durban taking the genre to his peers in Lagos earlier this year where he worked alongsideNigeria’s best and biggest producers and artists, including IDYL and ALPHA.  Universal Music Group Ngeria hired the creative services of producers Sons of Sonics, Pheelz, TMXO and Moss_2kriss to mix Southern and Western African beats.

The documentary was shot and edited by Ndumiso Ngwane of Chromakey Media with the aerial shots by Nigeria’s Benny Black Productions.

An originator, tastemaker and a game changer both sonically and visually –Okmalumkoolkat’s extensive body of work includes projects such as Boyz-N-Bucks, Dirty Paraffin and Holy Oxygen. His collaborative efforts so too are a thing of legends including works with Spoek Mathambo, LV, OKSharp, The Frown, Motel Mari, Kid Fonque, Cid Rim , The Clonious, Julio Bashmore, Branko, and many other humans and labels abroad.

He has collaborated with the likes of J.R, DJ Sliqe, Ganja Beatz, Reason, K.O, Stilo Magolide, Riky Rick, Cassper Nyovest, Kwesta, Wintness The Funk, Dj Sandiso and a host of other commercial artists in South Africa. He has proven to be the main ingredient in hitmaking from these collaborations.

Okmalumkoolkat grew up in 1980s South Africa in Umlazi, KZN and with a less flamboyant, more traditional name, known to his friends and family as Smiso Zwane. His love for music and pop culture grew from an early age with a younger ‘Smi’ always curious about radio playlists and joining a dance group from his early teens. Always been an early-adopter and trend-setter throughout school.

Smiso has always valued education, he pursued tertiary education at Vega School of Communications after he matriculated. After graduating from college, the aspiring artist moved from Durban to Johannesburg where he met Dokta SpiZee, with whom he formed Dirty Paraffin.

The duo shared a mutual passion for art, music, and design so they worked on projects such as company logos with the intention of starting a design studio. It was too early for that dream to come true, so the pair went on to seek the grind of the nine-to-five. Using the skills he had garnered during his college years, Smiso designed newspaper layouts and ended up working as digital co-ordinator for Nike South Africa, that gave him a hunger for marketing as he was part of the Nike Sportswear Energy Marketing Team.

He has a signing with Austrian label “Affine Records” based in Vienna. They have released the “Holy Oxygen I” EP ( 2013 ) the follow up “Holy Oxygen II” EP drops early next year.

Over the last 18 months, Smi has been promoting his debut full length album, Mlazi Milano, which was released late 2016, following the success of the album’s first single “Ntwana Yam” and follow-up single “Gqi”, whose video reached 2 million views in a matter of months. The mammoth task of scripting, producing & filming a short film for the next single Amalobolo saw Okmalumkoolkat test out his acting skills and also saw him seated in the producer’s chair for this 10-minute extended music video. The short film also required extensive scoring and composing and is still one of Okmalumkoolkat’s proudest releases.

2017 saw Okmalumkoolkat perform 136 times over that year promoting the release of the record and its successes. Mlazi Milano was not done yet! In 2018, the highly anticipated and LONG-awaited video for Okmalumkoolkat’s “La Liga” single was selected as the next worldwide release. Shot on location in ‘Mlazi and Dubane , the Gqom megastar returned to his roots, drawing inspiration from his upbringing and from five-a-side Spovington soccer friendlies back home.

In 2018, Okmalumkoolkat signed a licensing deal with Universal Music and, with the major label’s worldwide backing, has planned releases in Nigeria, Kenya and the UK.

Zwane is also managing director of his own company ‘Sjambok Studios’: home for all of his upcoming projects, be it music, clothing, film or visual art. The company has since seen the production for Gqom duo, Amadando.

Okmalumkoolkat continues to traverse the country and is planning a tour to Nigeria and the UK in early 2019.

For bookings, Contact Makgotso Kgooe on 0767413298 or email [email protected]